An analysis of big dig

Boston commute is as congested as it was 10 years ago To everything there is a season, and a 10th anniversary — in Big Dig lore, the opening of the Albany Street ramps marked its completion — is a time for taking stock. A full decade since this thing was wrapped up.

All design work has essentially been done, construction is about 85 percent complete, and portions of the project are now being put into operation. Among them are the deep slurry walls constructed in soft clay, the soil-freezing and tunnel-jacking operation at the Fort Point Channel crossing, and the Leonard P.

Zakim Bunker Hill Bridge, which is the widest cable-stayed bridge in the world. It must also be noted that extensive construction has taken place in a dense urban area with minimal damage to existing structures and utilities, traffic has been kept flowing through a busy city for over a decade, and a major railroad yard continued operations while a tunnel was built beneath it.

Accomplishments have not been limited to the technological. The Owner-Controlled Insurance Program OCIP was an effective and cost-reducing response to the challenge of obtaining adequate insurance coverage for the large numbers of engineering and contracting firms involved in the project.

The MTA wished to determine if such practices will be adequate for completing the project in a timely and cost-effective manner. The report therefore focuses on project-management and contract-administration practices and procedures in place as of October and looks toward the future—that is, to the end of the project and its transition to a fully operational system.

Recommend improvements to the reporting and controls procedures.

Determine the appropriateness and effectiveness of the structure for transition from construction to operations. During its long history, the project has been scrutinized by myriad investigative and oversight bodies, and it will no doubt be subject to additional probing yet to come.

The committee maintains that management and organizational changes can still be implemented both for saving money and easing, even expediting, the transition to operations. The committee considers all of its conclusions to be relevant to the issues confronting the MTA, but it also believes that two matters of overarching importance merit special emphasis and priority attention: The uncertain financial burden and potential for delay posed by the excessive number and monetary value of outstanding contract claims and related issues.

10 years later, did the Big Dig deliver? - The Boston Globe

The need for the transition process from construction to operation and maintenance to be properly organized and managed. Page 3 Share Cite Suggested Citation:And the Big Dig doesn’t solve congestion south and north of downtown. 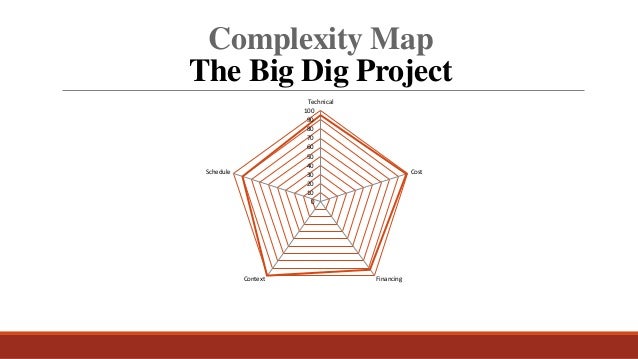 The Central Artery/Tunnel (CA/T) project is one of the most complex, and certainly the most costly, public-infrastructure projects ever undertaken in the United States.

Often called the “Big Dig,” the project was conceived to improve the traffic flow in downtown Boston and link several major. The information you may have seen on this page has moved to the initiativeblog.com website: initiativeblog.com Please update your bookmarks or favorites to.

Template. an analysis of big dig Data mining is the process of sorting a creative short story about cruelty through large data sets to identify patterns and establish relationships to solve problems through data analysis RFM (recency.

The Central Artery/Tunnel Project (also known as the ‘Big Dig’) was a scheme to rebuild Boston’s elevated Central Artery expressway, which cut through the city center, in order to eliminate this disturbing element and relieve the persistent traffic problems in .